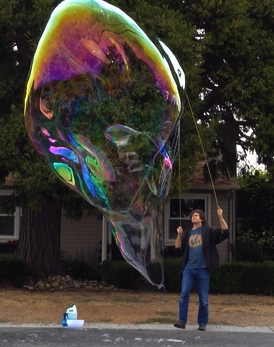 For some time, I have wanted to see if I could make use of CMC (Sodium CarboxyMethylCellulose) which was reported to me by a chemist to be the most beneficial polymer for bubble juice other than PEO. I had some disappointing attempts a year or two ago to make a juice that was CMC-based. This was around the time that I was having a lot of success with PEO-only and HEC-only mixes.

I had some nice sessions at the time with CMC-based mixes, but I didn't come up with any juice that was as good as my best PEO or HEC mixes. The CMC mixes seemed "tighter" than HEC or PEO mixes. When there was enough CMC to make water/detergent bubble-friendly, the solution also resulted in a "tight" skin. The bubbles were less self-healing than PEO or HEC bubbles and, with large loops, the size potential was less. I put my exploration of CMC on hold as there seemed like other more pressing/fruitful lines of inquiry to pursue.

Some months later, there was a discussion on SBF, the Soap Bubble Fanciers Yahoo Group, of CMC. A couple of people mentioned that they were finding HPMC+CMC to be beneficial to PEO-based mixes in a way that neither HPMC or CMC were. One of these people mentioned that they found no (or little) benefit to HPMC as a secondary polymer (with PEO as the primary) but great benefit to the HPMC plus CMC combination.

I have also been curious about exploring more viscous mixes since one of my good bubble friends likes PEO-based mixes that have more viscosity than what one can get with PEO-alone (without oeverdosing). With PEO, it isn't possible to get the mix to be very viscous without overdosing with PEO. The high molecular weight PEO that we use (J-Lube or WSR301) overdoses a mix long before it makes a big dent on viscosity. By contrast, HEC mixes will become too thick for use before the HEC makes the mix un-bubbleable.

My first experiment involved the addition of the suggested amounts of HPMC and CMC. The suggestion was basically to use Jumbo Juice like concentrations plus the addition of twice as much high viscosity CMC as HPMC (K15M). I mixed up three mixes, eGoo, PEO plus HPMC, and PEO plus HPMC and CMC. The HPMC + CMC mix was noticeably better than the HPMC-only mix but no better than the eGoo I had on-hand.

Granted, that was just one test and multiple sessions are really necessary to get conclusive results, but time is fleeting. Perhaps, someone might have liked the slightly different flow, but the bubbles themselves didn't seem to be improved (nor hurt).

I decided that for the next trials, I should go more extreme -- push the PEO limits a bit and increase the amount of HPMC and CMC quite a bit to achieve a mix that is noticeably more viscous. Co-incidentally, this was about a week before I had my first (and, so far, only) experience with the Bangwool bubble juice (with which I had some great success -- see the video ).

Version 1.0: I decided to try somewhat ridiculous amounts figuring that I could always dilute (with water and detergent) as necessary. I somewhat arbitrarily decided on these amounts:

The result is a very thick mix that is a bit stringy. With small loops, the size potential seems less than my standard PEO or guar-based mixes. However, when I tried it with very large loops (well, very large for me) on the order of a 100" top-string, I found it to work at least as well if not better than my standard mix. With such large loops, the issues that influence maximum size are different than with smaller loops.

Ihave not yet done enough head-to-head trials to know if this mix is actually working better than the PEO-only juice, but it worked well enough that I want to explore it some more.

I notice in reviewing the video that almost all the bubbles broke on the top far from the attachment points. So, the problem closing the bubbles had more to do with the life-expectancy of the film rather than bubble-ability.

Besides comparing to PEO-only mixes, I also want to try a mix that has uses less PEO but holds the other ingredients steady.

On Sept. 17, I mixed up a version with less PEO and a slightly different mixing protocol which I am calling version 1.1. It worked quite well in a Sept. 18, 2012 test session. You can watch video of the session here .

One hour after mixing it gets 5 to 8 colorful bubbles when using a small plastic wand. The mix is a bit stringy and thick.

Since part of my reason for exploring this mix was to see if there is anything to the conjecture offerred by a chemist on SBF that multi-polymer mixes are inherently worse than well-tuned single-polymer mixes, I decided that I need to see how crazy thick one can go with this. I am also curious to see in what ways the performance changes with viscosity. Version 1 turns out to seem thick compared to a straight PEO juice, but it isn't really all that viscous in absolute terms.

So, I decided to really up the amount of HPMC and CMC. 1.2 users these amounts of polymer:

I haven't yet measured the viscosity of this solution. I had a nice test session with it on 2012/09/26, but I can't drawn any conclusions yet about its performance relative to the other two versions or a straight PEO mix. Analyzing the one test session is a bit tough because conditions were changeable AND there is roadwork being done in the neighborhood with occasional gusts of diesel wafting our way.

The next step is to go even more viscous. I had expected this version to be viscous to the point of unusability but it wasn't outrageously thick.

This version is intended to be ridiculously thick to see if the extra viscosity is beneficial for making giant tubes and bubbles with the 100" top string. The exploration of slow flowing solutions is to see if this quality of the Bangwool solution that created such large bubbles is generally useful. It is quite possible that the high viscosity of the Bangwool solution is a side-effect of the chemistry that creates such a nice mix and not the cause. This solution -- given the ridiculously large amounts of polymers -- should also give some insight into the validity of John P's claim on SBF that using HPMC and CMC along with PEO will result in a solution inferior to one that is PEO only.

For the base recipe, see above but substitute this amount of polymer powders.

This recipe creates some pretty magnificent "ghosts". To test Louis Pearl's claim that Mr. Bubbles can reduce or eliminate ghosting, I did some tests and found that 1-1/2 cups of Mr. Bubbles added to one quart of PHC.13 eliminated the ghosts. I didn't notice any other dramatic changes to the solution's behavior when the Mr. B was added. The pictures in this section had maybe 1/2 cup Mr. B in about 6-8 cups PHC1.3
Retrieved from "https://soapbubble.fandom.com/wiki/User_blog:Espiegel123/2012_09_%22PHC%22_Explorations?oldid=8056"
Community content is available under CC-BY-SA unless otherwise noted.