The colors of a soap film provide a precise measurement of the film's thickness. The relationship between the colors of a soap film have been well known for more than a century. In fact, these colors provided important evidence in confirming the molecular theory of matter. The color charts on this page mapping color to thickness were prepared by a German mathematician based on well-known and uncontroversial techniques.

Familiarity with the colors and the thicknesses that they represent is beneficial for soap bubble lovers and provide insights that will make you a better bubble maker and bubble juice brewer. Soap bubbles have very thin walls. The range can be anywhere from 10 nanometers at the top of a thin-walled bubble to over 1000 nanometers. By contrast, human hair's thickness range is on the order of 40,000 to 60,000 nanometers. According to a post on SBF soap films may be as few as a few soap molecules thick.

The chart below shows the colors of a soap film and the associated thickness (a vertical-oriented version of this chart is provided at the bottom of the page):

A bubble's colors are caused by a phenomenon known as Thin-film Interference. When light bounces off of a soap film, there are reflections from both the front and back of the film that reach the eye. Interaction between these reflections cause the colors that we see. The colors are directly related to the film thickness (as well as light color and lighting angle). You can accurately gauge the thickness of a bubble's walls by examining its colors.

The color differences between the bubbles above are solely due to the amount of detergent. Detergent concentration has a profound influence on the film thicness as discussed in Dilution. See this blog post for details.

Become familiar with the colors associated with thin and thick films. It is valuable to be able to recognize the colors associated with thick and thin films. Take a look at the chart near the top of this page that maps color to film thickness. The numbers on the chart indicate the film thickness in nanometers. When the film is very thin (the far left edge of the chart), it is so thin that it film reflects no light and is often called the "black film". Against dark background, the buble will be virtually invisible. As you move to the right, you see the colors associated with increasingly thick films. Notice that yellow and blue colors only appear in films that are thinner than about 600 nanometers. Films thicker than 600 nm  are dominated by increasingly dull-looking shades of green and pink. Watch the videos below to observe the progression of colors.

Due to the influence of gravity, a stable soap bubble's walls are thinnest at the top and thickest at the bottom. The normal order of things may be temporarily disrupted if a bubble is turned or flipped by the wind or a performer, but will be restored when the bubble stops moving. When a bubble is initially blown, it may take a little while for the bubble to stabilize. You will see swirls and eddies as the bubble stabilizes.

As a bubble ages, evaporation and gravity will cause the film to become thinner and thinner causing the colors to shift. If the air is clean and the air still, you may see the bubble thin so much that it no longer reflects light and seems to disappear (the so-called "black film" stage). Watch the videos below to see this in action. The time-lapse video on the left below shows the thinning of a bubble that starts out with a relatively thick film and thins considerably. The video on the right shows a thinner-filmed bubble thinning all the way to the black film stage.

The film's colors provide information that has practical applications. Careful observation of the colors as a bubble forms can help a bubbler determine when the film is thinning out, indicating that it is time to close a bubble. A bubble juice chef can observe the color profile bubbles and adjust the dilution to achieve a desired film thickness (since dilution influences soap film thickness).

The colors are useful in determing the effective dilution range for a particular detergent. When there is relatively little surfactant, the soap film will be very thick because the surface tension will be high. Such films will be dominated by pink and green. With increasing detergent concentration, the soap film becomes thinner producing the colors seen on the left portion of the chart. Once you reach a particular concentration called the critical micelle concentration adding more detergent has relatively little impact on the film thickness and surface tension. (JAN 2015 NOTE: There has been a question raised on SBF as to whether or not the changes in film thickness are the result of surface tension changes. There seems no question that film thickness varies with dilution but the cause may not be a change in surface tension as it has been proposed that the Critical Micelle Concentration and Critical Dilution are very different.)

Dilution can have a big impact on bubble colors because of the way that dilution influences the soap film thickness. These color variations are especially noticeable with medium and big bubbles. They are harder to see with small bubbles. Soap dilution has some unusual properties. Read more about it in the Dilution article.

This timelapse video shows a bubble made with a pH-adjusted 40:1 mix of Dawn Pro and water as its film thins. It should help you get an idea of which colors are associated with which thicknesses. Notice how the bubble starts with only pink and green colors. These are associated with thick-ish soap films. Yellows and belows only appear as the bubble thins.

This video demonstrations the profound affect that dilution has on film thickness and color.

In the pictures below, pay close attention to the colors at the tops of the bubbles. These color profiles are consistent across bubble sessions as long as the lighting is similar. The difference between the 24:1 and 19:1 is fairly subtle. The difference between the 19:1 and 16:1 bubble are quite pronounced despite the much smaller difference in concentration. Changes in concentration have relatively small impacts when the concentration rises above the Critical Dilution. For Dawn Pro, the Critical Dilution seems to be somewhere between 16:1 and 18:1. The turquoise and yellow that appear at the top of the 24:1 and 19:12 bubbles are found at about the mid-line of the 16:1 bubble indicating a much thinner film for the 16:1 bubbles.

Very very dilute solutions create very thick films may even be colorless and glossy -- as opposed to very very thin film that are colorless, glossless, and almost invisible. Very dilute solutions (where the surfactant concentration is low) have thick films that result in films dominated by shades of green and red. As the dilution becomes less extreme, the greens, reds, and pinks become more saturated, and more purples, yellows, and blues start to appear. Once the Critical Micelle Concentration (CMC), has been reached, further increases in concentration have decreasing impact on the surface tension, film thickness and color. (EDITOR: clean up confusion about CMC as CMC and critical dilution may be different).

These color changes are related to changes in the solution surface tension. Due to the way that surfactants work, these changes occur primarily in the neighborhood of the CMC. The dilution ratios where this occurs varies (sometimes considerably) from detergent to detergent. The CMC (or at least the surface tension at a given dilution) seems to be influenced by the pH for some detergents (such as Charmy Dish Detergent ).

The images below are of similar-sized bubbles created with PEO-based bubble juice whose only difference was the soap dilution. Note how each dilution has a somewhat different color profile: 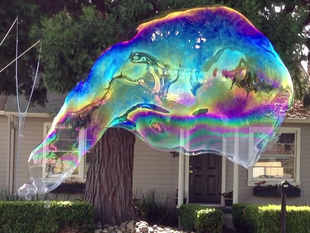 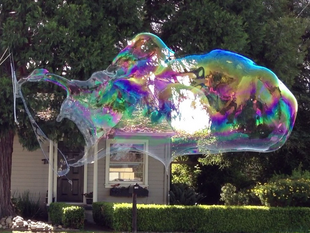 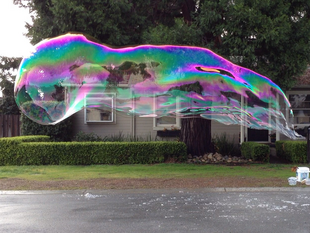 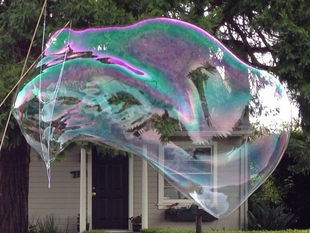 50:1 water:detergent ratio
Add a photo to this gallery

See also: blog entry that compares HEC giants with dilutions from 16:1 to 24:1.

Thank you to Bjorn of Seifenblasenmann.defor the use of his chart.

Some question has been raised as to whether the assumptions about the relationship between color and film thickness are influenced by the components of the bubble juice. A physicist specializing in optics gave some thought to the problem and expressed confidence that the difference in the index of refraction of mixes would not vary enough to have significant impact on the relationship.

The surfactant molecules in modern detergents may be larger than this.

A note about the color chart. If you do research, you will find a few charts which map color to thickness. There is some small disagreements between the different available charts due to slightly different assumptions about the parameters such as index of refraction, viewing angle, etc.

Dawn Pro Color and Dilution Evaluation. Click here to see an evaluation of Dawn Pro and the color profiles at different dilutions.

There are many articles and videos on the web that illustrate, explain, or discuss the physics of bubble colors. Here are a few:

This article is a stub. You can help Soap Bubble Wiki by expanding it.

Retrieved from "https://soapbubble.fandom.com/wiki/Color_and_Film_Thickness?oldid=18399"
Community content is available under CC-BY-SA unless otherwise noted.